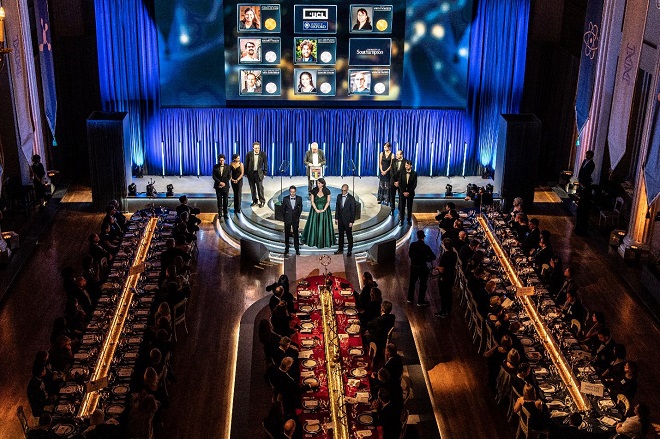 The Blavatnik Family Foundation hosted its third annual awards ceremony and gala dinner celebrating the honorees of the 2020 Blavatnik Awards for Young Scientists in the United Kingdom. Administered by the New York Academy of Sciences, the ceremony was held on March 4, 2020 at the spectacular Banqueting House of Whitehall, London. Built in 1622 by King James IV, Banqueting House is a historic venue that is the only surviving remnant of the Palace of Whitehall and has been used for royal events for centuries.

During his introductory remarks, Sir Paul commented, "What makes these awards so exciting to me is that we are not just honoring an exceptional group of young scientists, we are also putting our faith and belief in their futures. These awards are not just for the brilliant work they have already done, but also for fostering and championing world-changing work that we believe is yet to be done." Speaking to the cohort of Blavatnik Awards programs across the US, UK, and Israel he added, "We do like to think of this year’s Finalists and Laureates as the newest members of the global Blavatnik Awards family, with a connection unimpeded by geography and related to each other by shared scientific excellence."

In each scientific category—Chemistry, Physical Sciences & Engineering, and Life Sciences—two Finalists were each awarded prizes of US$30,000, and one Laureate in each category was awarded US$100,000. Sir Paul presented medals to the three Laureates and six Finalists at the ceremony.

In the Physical Sciences & Engineering category, CEO of the UK Atomic Energy Authority Prof. Ian Chapman , and astronomer Dr. Amaury Triaud from the University of Birmingham were honored as 2020 Blavatnik Awards in the UK Finalists. Prof. Anne-Christine Davis from the University of Cambridge introduced the 2020 Blavatnik Awards in the UK Laureate in Physical Sciences & Engineering, Prof. Claudia de Rham from Imperial College London. Prof. Davis described de Rham as a "vibrant, passionate, and adventurous person." She said, "I remember being completely amazed on reading the draft of her first paper for her doctorate. As I’ve watched her over the years, producing wonderful papers on aspects of gravity and cosmology, developing both as a theoretical physicist and as a person, my sense of amazement has only increased." As Prof. Davis described, Prof. de Rham was honored for developing a, "rigorous and viable theory of massive gravity—a theory of physics that modifies Einstein’s theory of general relativity to explain the nature of gravity."

Prof. Matthew Fuchter of Imperial College London and Prof. Stephen Goldup of the University of Southampton were honored as 2020 Blavatnik Awards in the UK Chemistry Finalists. Dr. Richard Preece, University Reader and Curator of Malacology at the University of Cambridge Museum of Zoology, introduced the 2020 Blavatnik Awards in the UK Laureate in Chemistry, Dr. Kirsty Penkman . Dr. Penkman, an analytical chemist from the University of York, has revitalized a previously dismissed fossil dating technique called amino acid racemization. "Kirsty’s work has enabled substantial increases in analytical precision and far more reliable dating, covering the whole of the Ice Age far beyond the limits of radiocarbon dating." Dr. Preece added, "By opening up this time window she is helping other scientists to better understand the chronology of human evolution and climate change."

In the Life Sciences category, biomedical engineer Prof. Eleanor Stride from the University of Oxford and Prof. Edze Rients Westra from the University of Exeter were honored as Finalists. 2020 Blavatnik Awards in the UK Laureate in Life Sciences, computational neuroscientist Prof. Timothy Behrens from the University of Oxford and University College London was jointly introduced by his friends and colleagues, neuroscientists Prof. Heidi Johansen-Berg and Prof. Matthew Rushworth, both from the University of Oxford. Prof. Johansen-Berg began her introduction by explaining that, "Tim began his research by showing how ideas derived from statistics could be applied in novel and exciting ways to study the brain and behavior." Prof. Rushworth added, "He has applied these ideas to understanding how we learn which choices to take, how we learn about each other in a social context, and how information is represented by the human brain—not just physical space, but abstract ideas, too."

The following day at Banqueting House, the Blavatnik Family Foundation and the New York Academy of Sciences held its second annual public symposium entitled " Game Changers: 9 Young Scientists Transforming Our World ." The symposium was hosted by BBC Science Correspondent Victoria Gill. With the goal of bringing the scientists and their discoveries directly to the public, all nine Blavatnik honorees presented their research in a public lecture format to an audience of approximately 200 attendees. Ms. Gill wrapped up the day of scientific lectures by leading a panel discussion reflecting current social and political issues affecting science in the UK The symposium ended with a wine & cheese reception enabling guests to network and converse directly with the honorees.